Because I Am A Big Dork

Ok, so the death flu has passed, but it left me on the verge of laryngitis and I sound like I have been smoking a carton a day since kindergarten. I have sounded like this for more than a week. Not attractive. But that really doesn't matter, as I have spent an inordinate amount of time sitting in front of my computer a) obsessively checking the status of my graduate school application and 2) watching the trailer for Leatherheads, starring two of my favorite FBLers George Clooney and John Krasinski. You can all watch it here. I CANNOT wait to see this movie. I'm so there opening night. I also stumbled upon the trailer for the new Incredible Hulk movie, which I guess they felt obligated to make because the first one sucked so badly. The new incarnation of Bruce Banner is Edward Norton, who I find strangely attractive even though half the time he plays characters so psychotic and scary I can't even handle it like in Primal Fear (which I caught on TNT one night and found it so freaking creepy I had to keep flipping between channels, but I couldn't ignore it either. It was mesmerizing. Do check out The Illusionist, however, because he is totally dreamy and non-creepy in it). When I was little I LOVED The Incredible Hulk and thought it was the coolest show, second only to Wonder Woman. Anyway, I stumbled across the trailer and I think I will have to check this one out as well.

When not ogling FBLers on my computer screen, I have been indulging my TV addiction by checking out FOX's new show New Amsterdam of which they aired 3 episodes in 10 days and I got interested in spite of myself. The show is about a guy, Johann van der Zee (now John Amsterdam), who saved a Native American woman's life in 1642, on the island that is now Manhattan, by stepping in front of a sword aimed her way and she brought him back to life, with the caveat he wouldn't die until he found his One True Love. So he has been alive for 400 years and is now a detective for the NYPD. For the five of us who watched The Lone Gunmen, the actress who played Yves Adele Harlow is Amsterdam's partner. Anyway, I got sucked in because a) I am a TV addict and the dearth of new shows in this post-strike world is killing me and 2) I could not figure out who the actor playing John Amsterdam (his name is Nikolaj Coster-Waldau which I can neither pronounce nor spell. I had to cut-and-paste it from Wikipedia.) reminded me of. This is what he looks like: 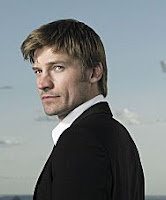 I finally decided it was as if some producer took DNA from Aaron Eckhart:

and mixed it in a test tube with DNA from Denis Leary: 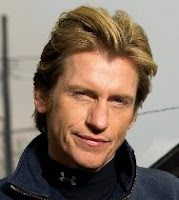 and created the leading man he thought could carry the show.

But now that I'm hooked, I must say it is a fun show. They have flashbacks of his previous lives woven in with the present-day procedural stuff, which is fun. If you want to check it out, you can download the pilot from iTunes for free.
Posted by Scully at 7:37 pm

i'm so out of the loop - where did you apply to grad school at??

Excellent job at pinpointing who he looks like.. He's very dreamy I must say. Maybe I will have to check it out. I hear you with the post strike lag.. it's terrible.

I love the show medium.. I don't know if you ever watch that.. but I just love Alison's character and her whole family. There are one or two very bad actors in it.. but I try to overlook them.

anyhoo.. glad you're feeling better. Kirk got the flu too.. I have actually never seen him that sick before. knock on wood.. but so far I've been lucky.

Heather - I think I have seen Medium once or twice, but never close enough together to get me interested. And I think it comes on at 10 here, which is way too late for me. If the show isn't over by 10, there is no way I'm going to be able to stick with it. I really liked the new show with Victor 'Spy Daddy' Garber, but it was on too late and I just kind of stopped watching. I'm lazy like that. I need Tivo.

CherBear - I don't know if he served a mission but he did attend BYU. He was there the same time Neil LaBute was and they had a couple productions shut down by the university. I know the only thing I've heard him say about it is that people shouldn't judge the Church by how he lives his life . Which I thought was rather mature, even though I always get the feeling that he is a bit of a tool. Maybe that is just me. 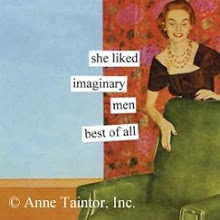 Quote of the Foreseeable Future

It is never too late to be what you might have been.

Where I Spend My Free Time

Books I Suggest You Read